We’re still waiting to learn (and may never know) how much the December 12 fire aboard the aircraft carrier Admiral Kuznetsov will cost the Russian Navy. 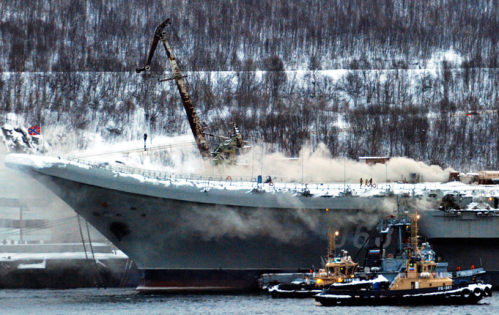 . . . there’s no final figure. The commission continues to work. Given that the work of firefighters and law enforcement organs has been gathered up, I think we still require some time to reconcile it. We simply weren’t allowed on-board for a long time.

Recall the fire took a day to extinguish and two Russian naval personnel — an enlisted contractee and an officer — died, and 14 others were injured.

The OSK chief said equipment in the engine room where the blaze occurred was already dismantled. Welding sparks started the fire and it apparently spread to electrical cables.

Completed in the early 1990s, the ill-fated sole Russian carrier is being renovated under an April 2018 contract. The ship was damaged in late October 2018 while floating out of the PD-50 dry dock at Roslyakovo. Kuznetsov was initially set to be finished in 2021, but the date has slipped to 2022.

The carrier reportedly will receive a navalized version of the Pantsir-S1 (SA-22 Greyhound) gun-missile air defense system, new boilers, pumps, flight control and communications systems, as well as repairs to its turbines.