Deputy Aerospace Forces (VKS) CINC and Chief of Air and Missile Defense General-Lieutenant Viktor Gumennyy [Goo-MYO-knee] says Almaz-Antey is completing development work on the S-500, and the VKS will receive it “soon.” Hard to argue. We know it’s in development, and he doesn’t say what “soon” means.

The prevailing forecast is that the S-500 will complete development, and appear with operational units on an “experimental” basis in 2017.

However, TASS reminds that VKS CINC General-Colonel Viktor Bondarev has said deliveries will start in 2016.  He’s an inveterate optimist; in 2012, he said 2013.

In any event, it’s a chance to review what’s claimed to date about the S-500.

The typical advertisement for the S-500 calls it a new generation, long-range surface-to-air missile with increased capability for high altitude (200 km) intercepts against ballistic missiles and RVs.  It can reportedly engage ten ballistic missiles simultaneously at a range of 600 km.  The S-500 is supposed to be superior to both the S-400 Triumf and U.S. Patriot Advanced Capability-3 (PAC-3).

The system is supposed have 40N6M (possibly a longer-range mod of the S-400’s 400-km missile?) missiles as well as hypersonic 77N6-N and 77N6-N1 missile interceptors.  TASS reported that these anti-missile missiles were successfully tested in mid-2014.

According to Interfaks, GPV 2011-2020 calls for procurement of ten battalions (or five “regimental sets”) of the S-500.  Almaz-Antey’s original contract called for initial deliveries in 2015.

Noted by the regime or not, this is “GOZ breaking.” Some producers get in trouble for it; important ones sometimes don’t.

Gumennyy said the share of “modern” SAMs and radars in Russia’s inventory is 45 percent.  Last December, the MOD indicated that 52 percent of all VKS weapons and equipment was “modern.”

P.S. President Vladimir Putin’s assistant for military-technical cooperation confirmed for Izvestiya today that Russia is negotiating sales of the S-400 system to China and India. 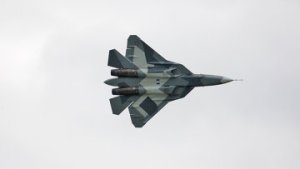 RIA Novosti reports the second T-50 (PAK FA) testbed will begin flight tests before the end of the year, according to Sukhoy chief Mikhail Pogosyan.  He said the first testbed has performed 40 flights.  Sukhoy is satisfied with the course of testing which has gone faster than expected.

Pogosyan added that negotiations with India on its entry into the fifth generation fighter program should be completed this year.  Russia and India will roughly split the development expenses for one- and two-seat versions.  The PAK FA will start to enter the Russian inventory in 2015, and Indian forces around 2020.

Last Friday’s NVO printed an interesting editorial that discussed arms exporter irritation with Deputy Defense Minister, Armaments Chief [former Commander of Space Troops and ex-General-Colonel] Vladimir Popovkin for publicly admitting the Defense Ministry’s dissatisfaction with many of the OPK’s products.  The exporters are obviously upset that Popovkin’s comments have, and will, cost them sales abroad.  But NVO concludes a greater danger would be trying to silence anyone–high-ranking defense official or independent defense analyst–who dares point out the OPK’s problems in the hope of remedying them.

NVO’s sub-title for the article is “The OPK’s systemic crisis threatens a breakdown in the supply of combat equipment to the Russian Army and a lack of export contracts.”

The Greeks have apparently called off a purchase of 420 BMP-3s for $1.5 billion (let’s call it $3.6 million per vehicle).  The deal had been 2 years in the making, and it wasn’t the state of the Greek economy that caused the halt.  According to NVO, the money was already in the defense budget.  Rather it was Popovkin’s specific criticism of the BMP-3 that folded the deal.

“We very much need to protect our soldiers.  Today everyone rides on top of the BMP because no one wants to ride in this ‘coffin.’  We need to make a different vehicle.”

Greek journalists published his remarks, and opposition politicians turned them into a scandal:  how can you buy unsuitable equipment that even the country that makes it won’t buy?

Popovkin also complained about the T-90 that the Indians are buying, the tank support combat vehicle (BMPT) that Rosoboroneksport recently demonstrated at an arms show in Kuala Lumpur, and other equipment which the army won’t buy for one reason or another, but which is put forth for export and actively advertised there.

According to NVO, the arms exporters are terribly offended because the [ex-] general cost them several lucrative contracts.  But, in NVO’s estimation, his speech is very necessary.  It says:

“. . . the truth about the condition of the Russian defense-industrial complex, about those processes occurring there, about the systemic crisis in it and the inability of its various directors, including even the government’s Military-Industrial Commission [VPK], to correct the existing situation, is not a secret at all.  It’s been talked about more than once.  On the most varied levels.  Including even presidential.”

NVO says this truth is very important; it could help the powers-that-be uncover the problem areas, fix them, and produce the modern equipment needed for the defense of the country’s interests.  Without an honest discussion, the deficiencies can’t be fixed.  But the Kremlin, government, the legislature, executive organs, or the regions won’t undertake any serious measures against negligent managers.  Despite constant talk of state arms programs, federal programs of technical reequipping of defense enterprises, in reality, with the exception of aviation and air defense firms, nothing is really happening.  It’s moving at a snail’s pace.  Or is it?

Foreign buyers send in 33 warranty claims for every 100 Russian weapons systems exported.  And the scandal with the Algerian MiGs didn’t teach the OPK anything.

It would be possible to silence critics and protect military-technical cooperation with foreign countries and keep the profits coming to the budget and the manufacturers.  But won’t the low quality of these systems, their inability to meet the demands of modern war, really be a negative advertisement?  Does someone really think if they quiet the generals, together with the Moscow media, military analysts and experts then they can sell some kind of half-finished military goods to a serious buyer?  Naive views worked out for illiterate dilettantes.

NVO figures there are two ways out:  either give up, lose export orders, and accept the situation or sharply improve the quality and effectiveness of Russian weapons, reduce prices and defects, and strive to be on the leading edge of technology.  In other words, saving defense industry is in the hands of defense industry itself.  And no one else.

When it comes to combat vehicles, sniper rifles, UAVs, assault ships, night sights, and armor, the international division of labor in defense industry isn’t such a bad thing after all.  It brings Russia closer to the ‘probable enemies’ of the recent past.  But when it comes to nuclear-powered submarines and strategic missiles we still don’t know how to do them ourselves and no one’s going to sell us those.  And [unless Russia remembers how and gets its OPK in order] it will remember national security the same way it remembers the long forgotten past.

This is NVO’s way of telling the Putin-Medvedev regime it would be foolish to shut down this feedback channel that tells it what needs fixing in the OPK.