Here are the Russian MOD’s numbers on coronavirus infections in the military through May 8. It’s important to follow the official figures, accurate or not, just to compare with other data and events.

On May 6, irresponsible and ridiculous as it may sound, Defense Minister Shoygu came close to claiming that the Russian Armed Forces are turning the corner on COVID-19:

“Our military medics have been doing great work in battling coronavirus. As a result the number recovered exceeds the number of sick. We understand this could and should be the same plank, shelf, I don’t what else to call it. But to defeat it is possible only when the quantity recovered is more than the quantity sick. Every day.”

Mr. Shoygu seemed to be fumbling toward asserting that the MOD is flattening its infection curve. But epidemiology and even his numbers don’t really support the contention. Even assuming they are true and accurate. Shoygu may be confused by the military’s reporting on those in contact with infected people who didn’t contract the disease.

The Russian MOD ended the training year for pre-military cadets on April 30, and seemed to drop reporting on their cases but then resumed a few days later. New positive tests among VVUZ students appear to have leveled off. But again it’s all about who gets tested and how accurate the test is. And students deemed healthy presumably went home after April 30.

With the number of cases the MOD has reported, it’s hard to believe there have been no deaths from COVID-19 in the military.

The next test for the Russian MOD will come when it starts bringing young men into military commissariats and sending new conscripts out to their units later this month. Draftees are supposed to be tested and free of coronavirus, but we’ll see how this goes.

On the larger picture, the Russian government on May 8 reported 188,000 cases with just over 1,700 deaths — a mortality rate of just 0.9 percent. Russia is being ultraconservative in estimating causes of death. Most countries report rates of four, five, or even seven percent. Moscow Mayor Sergey Sobyanin — the public face of Russia’s response to the crisis — says Russia’s COVID-19 infections may be double that official 188,000 number.

Meanwhile, President Putin continues to be distant from all this, having turned his famous manual control into remote control. 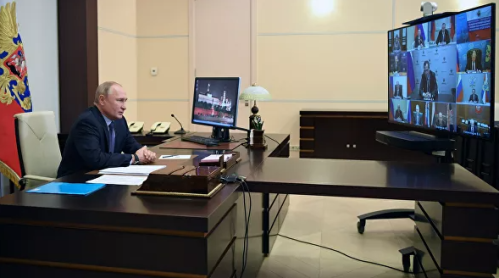 Independent pollster Levada reports Putin’s approval has dipped to 63 percent, the lowest since before Russia’s seizure of Ukraine and war in eastern Ukraine.

The Russian MOD added numbers for those who recovered from the infection (highlighted in green). Pre-military schools no longer have pupils in isolation. They apparently didn’t turn positive.

The other eight are supposed to open by May 15. Each center can accommodate about 100 patients.

Russian Defense Minister Shoygu told the MOD Collegium yesterday that his department has an inventory of nearly 7,000 hospital beds and capacity for 30,000 patients “under observation.” His deputy Timur Ivanov said the MOD has also formed seven 100-bed mobile hospitals out of independent medical battalions and companies.

Ivanov also stated that the MOD is buying 300 ventilators for 450 million rubles. They are due for delivery before May 15.

Now RF Prime Minister Mikhail Mishustin is positive for COVID-19. Who else in the Russian elite will turn up with the virus?

When I started tapping these keys for Russian Defense Policy 3,792 days (two or maybe three computers) ago, I couldn’t have guessed my 1,000th post would be about an infectious disease bedeviling our planet (Russia included). But it is about that.

And despite COVID-19, I’m taking a moment to congratulate myself for that nice, round 1,000 number.

The posts don’t come as frequently right now, so who’s to say if or when there’ll be a 2,000th. Even harder to imagine, what would or will it be about?

But enough of that . . . . COVID-19. The RF MOD issued another bulletin today on the spread of the novel coronavirus infection. Let’s track the numbers as long as they last. Can’t help suspecting they’ll be less than forthcoming eventually (or disappear altogether). Here’s a link to an inelegant spreadsheet.

Highlighted in red on the spreadsheet are significant day-to-day jumps. The Russian military school population is getting hit pretty hard. VVUZy cadets testing positive went up by 262, and, sadly, young pre-military school patients went up 85.

The Suvorov and Nakhimov schools seem like a pretty good deal for many Russian parents, but perhaps not so much now.

Today Defense Minister Shoygu ordered the obvious. The conscript cohort demobbing this spring must be released into the reserve while protecting them against contracting the virus as they make their way home. The trick of course is how. No specifics.

Yesterday, belatedly, he ordered that the academic year in VVUZy and pre-military schools will end early, on April 30. Why not immediately one wonders.

The Russian MOD has released official numbers on coronavirus cases in the armed forces.

From March through April 26, according to the MOD, 874 Russian servicemen tested positive for COVID-19. Four are in critical condition, including one on a ventilator. Fifteen are in serious condition. The rest are asymptomatic.

The first announcement of infections in the Russian military appeared on April 14. However, rumors of cases in the armed forces were reported in Russian media as early as April 1.

In Russia’s extensive pre-military educational system, there have been 192 cases. Of them, eight are in MOD hospitals, 15 in isolation at their schools, 9 in civilian hospitals, and 160 at MOD sanatoriums.

In the MOD’s civilian workforce, there have been 245 cases treated. There are 25 in MOD hospitals, 33 in civilian hospitals, 175 in isolation at home, and 12 in MOD sanatoriums.