But the Defense Minister deserves praise for facing some of the army’s sharpest critics.  And for apparently saying he wants to meet them routinely, according to Krasnaya zvezda.  His predecessors rarely did.

The headline story from the meeting was Serdyukov’s offer for civilian activists to accompany conscripts through the induction process until they reach their place of service, and settle into their units.  He also offered fuller access to the military’s bases.

“We want to propose an option for accompanying conscripts:  take part in the callup commission, and then go with them to units and see how they are billeted.”

He added that he is prepared to let civilian representatives into all military units, with the exception of an unknown number of secret ones.

According to ITAR-TASS, he said:

So Serdyukov bowed to greater civilian involvement, if not control or oversight, and also stumped for his efforts to ‘humanize’ conscript service in the armed forces.

His offer was interesting for the catch it included . . . these civil society representatives have to participate in the callup commission before they can go with new soldiers to their units.

Maybe Serdyukov thinks they won’t take up the offer.  Maybe he thinks, if they do, they’ll dirty their hands in the difficult work of deciding who has to serve, or doesn’t, and where.  Maybe sorting through far-from-ideal candidates and still trying to meet manpower quotas will temper their criticism.

But it may give conscript rights activists even better insight into induction process problems and abuses than they already have.   We’ll see.

Serdyukov touted efforts to enable conscripts, especially those with dependent parents and children, to serve as close to home as possible, rather than sending them as far away as possible like in the past.

But Valentina Melnikova of the Union of Committees of Soldiers’ Mothers (SKSM or СКСМ) believes no one is fulfilling Serdyukov’s order to assign draftees closer to home:

“In military commissariats no one pays attention to this.”

According to Lenta.ru, Serdyukov cited his other innovations – introducing a rest hour after lunch, lifting virtually all restrictions on the use of cell phones by conscripts, giving them a chance to earn a weekend pass, and freeing them from all housekeeping and maintenance chores in their barracks, units, and garrisons.  But neither Serdyukov nor the media could say how widely these initiatives have been implemented.

According to Krasnaya zvezda, Serdyukov wants to revive moribund parents’ committees introduced several years ago, but found impractical when young men served in remote areas far from home.  If they’re closer to home, their parents might be able to visit their units.  Serdyukov also mentioned the 4-year-old Defense Ministry Public Council.  Krasnaya zvezda reported that Melnikova is heading its working group to coordinate its activities with other public and human rights organizations.  Serdyukov expressed the hope that such a unification of efforts will be beneficial.

Polyakova would like to remove examining physicians from the callup commission, and from the control of the voyenkomat.  She said their qualifications need improvement also.  She objected to Serdyukov’s cuts in military medicine and called for better psychiatric assistance for conscripts in their units.

Polyakova says Serdyukov’s officer cuts have worsened the situation in the barracks.  Sergeants who were supposed to replace officers are ill-prepared for greater responsibility, and barracks violence has spiked as a result.  The Main Military Prosecutor’s figures support her.  Sergey Fridinskiy recently reported that hazing and other barracks violence increased 50 percent in the first five months of 2010.

Newsru.com reported Tatyana Kuznetsova’s concern about the army stretching its definition of fitness and taking men who should be deferred or exempt for health reasons:

“But, as we know, right away, having just reached the troops, many guys turned up in hospitals which were overflowing.  Like in a war, they laid in three rows, on the floor, in corridors.  These boys were called up sick, with chronic illnesses that weren’t discovered during the callup.  They weren’t discovered on purpose.”

All in all, it’s clear that, no matter how often they get together, Defense Minister Serdyukov and human rights activists will continue to disagree about the state of the army and how to change it.

According to IA Regnum, when Serdyukov said there’s no money for contract service, the activists asked him to explain:

“. . . how much money is being expended from budgets at all levels to fulfill the conscription plan in the ranks of the armed forces, as a result of which young men who are sick, invalids, and psychologically unstable end up in the army.  And next compare this with the amounts of expenditures to dismiss conscripts from the army after several months for health reasons, and to pay compensation to the families of those who have died or become invalids in peacetime.”

More Drugs, Extremism in the Army

According to ITAR-TASS, Main Military Prosecutor Sergey Fridinskiy today warned colleagues at an inter-governmental meeting on military-patriotic indoctrination that anti-drug measures among minors are not having the intended effect, and:

“Based on last year’s results, the growth of crime connected with illegal trade in narcotic and dangerous substances in the troops (of all power structures) exceeded 70 percent.”

For his part, Deputy Defense Minister, State Secretary Nikolay Pankov agreed that drug-addicted youth pose a threat not just to the army, but the whole country.  He added:

“The ‘drug addiction’ diagnosis is becoming customary for draft commissions.” 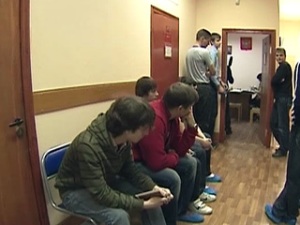 At the Draft Board (photo: Newsru.com)

And as if on cue, today from a Ural region draftee assembly point in Yegorshino came the story of 100 young men who arrived recently high on marijuana in hopes of being deferred from conscript service for dependence on narcotics.

The voyenkomat reported nothing like 100 guys showing up before the draft board in a state of ‘narcotic intoxication’ has previously happened.

“There’s never been such a thing, we are sure this is a particular feature of the current draft.  The young guys intentionally used narcotics in order not to end up in the army.”

According to Newsru.com, a State Narcotics Control officer for Sverdlovsk Oblast is investigating the ‘stoners’ who came from Nizhniy Tagil, Yekaterinburg, and Pervouralsk.  The voyenkomat said these men would be returned to their towns for additional medical observation and rehabilitation.

ITAR-TASS reported more of Pankov’s comments on a different subject.  He said:

“In Russia, nearly 150 extremist youth groups are active, the participants in them live mainly in big cities.”

Pankov didn’t rule out that young extremists could spread from large cities to small towns and lightly populated areas, saying:

“This is highly probable.  All this comes into military collectives and leads to the growth of nonregulation relations, so-called ‘dedovshchina.'”

This is just one reason the army’s always preferred country boys from the ‘sticks’ rather than city guys.

The topics of drugs and nationalism in the army, if not taboo outright, have been little discussed.  Some honest talk about these problems might be the first step in solving them.