Pressing the French on Mistral

Vladimir Socor has a good piece describing Russian shipbuilders’ complaints to the Federal Antimonopoly Service (FAS) about the Mistral purchase as another way to press Paris to finalize the deal on Moscow’s terms.  Socor says:

“In line with the Russian government’s tactics, [Deputy PM and OSK Board Chairman] Sechin is signaling that Moscow could turn to other international shipbuilders, or ultimately to Russian shipbuilders, if France does not sweeten the terms of the Mistral deal for Russia.”

“Thus, Sechin’s subsidiaries [Yantar and Admiralty] ostensibly seek anti-monopoly action in a case handled by Sechin himself for the Russian government.”

This points up the bizarre circumstance in which Sechin is negotiating with the French, while his OSK subsidiaries complain about the potential deal.

But, as Interfaks wrote on Wednesday, FAS says it lacks jurisdiction over the complaint from Yantar and Admiralty.  FAS also says there’s no basis for a complaint since no deal for Mistral has been reached.

The shipyards argue they’ve been excluded from bidding to build amphibious assault ships for the Navy, and the terms of the competition weren’t publicly announced.  Their complaint seems to have merit since, from the outset, the Defense Ministry went directly after a specific ship and supplier, without issuing general requirements for a ship class.

According to Interfaks, OSK supports Yantar and Admiralty, and calls the Defense Ministry’s actions ‘obscure.’ Its representatives periodically speak of Mistral like a done deal, but how the deal will proceed remains unclear.  An OSK source says, “And every time such statements deliver a blow to the self-esteem of domestic shipbuilders who know how to make these ships.”

And, as Socor notes, talks continue also with the Dutch and Spanish [as Defense Minister Serdyukov has always pointed out] and now the possibility of a deal with the South Koreans has been thrown in, further roiling the waters.

Izvestiya yesterday said OSK President Roman Trotsenko sent a letter to Defense Minister Serdyukov proposing a review of the military’s plans to acquire Mistral.  In its place, Trotsenko suggests building the South Korean Dokdo under license in a Russian shipyard.  He says he can build it in three years, and more cheaply than Mistral by one-third.  OSK has a joint production agreement with Dokdo builder Daewoo. 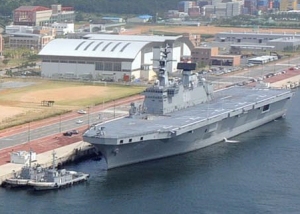 The Defense Ministry insists Russian builders demurred when asked if they could build these ships.  Izvestiya doubts Trotsenko’s offer is realistic given the lack of available Russian buildingways.  But the paper concludes the appearance of the letter shows the struggle for the amphibious carrier contract isn’t over.