He Simply Couldn’t Take It

Shamsutdinov detained in his barracks

Russian Army conscript Ramil Shamsutdinov may have killed his fellow servicemen because of the constant abuse he endured, according to a report in Gazeta.ru.

On October 25, Ramil Shamsutdinov killed eight personnel (including two officers) and seriously wounded two more during guard duty shift change at military unit 54160 in the Gornyy ZATO not far from Chita in Zabaykalye.

According to a former worker at the unit, one of the victims was “famous” for abusing his subordinates. Sources also said Shamsutdinov may have been ridiculed or singled out as a non-Russian. But the investigation on that score continues.

The 20-year-old was called up in early July, assessed to be psychologically stable, and allowed to carry a weapon. The draft board had placed him in the second group for “nervous-psychological stability” meaning he would experience a nervous breakdown only after being in a difficult or dangerous situation for a prolonged period. The MOD routinely trusts conscripts in this group to carry out missions with weapons and ordnance.

The MOD officially stated that Shamsutdinov’s actions may have been the result of a breakdown brought on by personal difficulties unrelated to his military service.

But, according to Gazeta.ru, media sources with sources in Shamsutdinov’s unit claim he was a target of constant abuse from other servicemen.

Tyumen news outlet 72.ru published a report from a unit source saying that one of Shamsutdinov’s victims, Senior Lieutenant Danil Pyankov, was well-known for abusing conscripts and driving them to a “serious psychological state.” Shamsutdinov is from a village in Tyumen.

The source said Pyankov once kept him awake studying military regulations for four days straight and forced his troops to put on and take off protective gear for five consecutive hours. He concluded Shamsutdinov simply couldn’t take it.

Shamsutdinov’s father — a policeman — said his son never complained about abuse from officers or more senior soldiers, i.e. dedovshchina. Friends say he once asked relatives to put money on someone else’s bank card because his was supposedly frozen. But he also said he planned to stay in the army as a contractee.

Unit 54160 is inside a closed administrative-territorial entity. It was formerly known as Chita-46 and is operated by the MOD’s 12th GUMO — Russia’s nuclear weapons custodial force.

The unit is still under GUMO command and RVSN prosecutors went to investigate. It likely serves the 200th Artillery Brigade and newly-established 3rd Missile Brigade (Iskander missiles) in Gornyy and Drovyanaya.

The Russian military has avoided similar incidents for some time. The MOD claims the climate inside units and barracks has improved drastically over the past decade, but this assessment is apparently exaggerated.

With the fall draft underway, the MOD has to question the quality, or lack of quality, in the screening of potential soldiers. 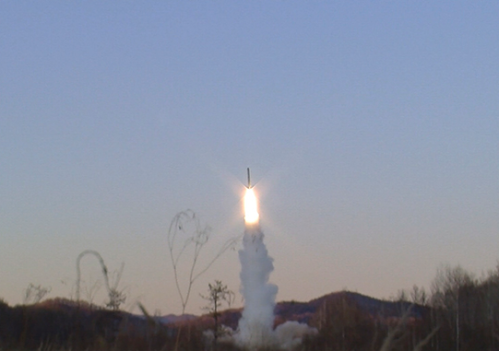 Recall the Russian press reported in advance that Grom-2019 would be a command and control CSX with live activity by RVSN, LRA, VTA, and Northern and Pacific Fleet forces and 16 ballistic and cruise missile launches.

According to Mil.ru, Supreme CINC Vladimir Putin participated in the exercise from the NTsUO.

Russian Northern and Pacific Fleet SSBNs fired SLBMs from the Barents Sea and Sea of Okhotsk to the Kura and Chizha impact areas respectively.

Video showed Delta IV-class SSBN Karelia (SS-N-23 Sineva SLBM) was the Northern Fleet shooter. An SS-N-18 Stingray was supposed to be fired, so the Pacific Fleet boat had to be one of three Delta III-class SSBNs.

NVO claimed more Kalibr missiles were fired from submarines and from Pacific, Baltic, and Black Sea Fleet platforms. This should be considered unsubstantiated for now.

Iskander crews launched cruise missiles (SSC-8 or 9M729) from ranges in the Southern and Eastern MDs. The SSC-8 was the Russian system that busted the INF Treaty.

Mil.ru reiterated that Grom-2019 was intended to check the readiness of Russia’s military command and control organs and the skill of commanders and operational staffs in organizing command and control of subordinate forces. The MOD website reported all missions were fulfilled, and all missiles reached their targets and confirmed their capabilities.

With INF gone and New START (START III or what the Russians call SNV-III) approaching expiration in 2021, Grom-2019 might have been the first stratex of a post-arms control era. When were intermediate-range nuclear missiles used to such a degree in a stratex? Moscow may have tested its nuclear response and escalation in a world without a ban on systems short of truly strategic ones.

Posted in Command and Control, Strategic Deterrence, Training and Exercises

Shamanov addressing the Duma in 2018

Former VDV commander General-Colonel Vladimir Shamanov’s Defense Committee has criticized the RF government in advance of the first Duma reading of the federal budget for 2020 (and plan for 2021-2022). The committee accused the government of steadfastly “ignoring the army’s needs” — pay for MOD civilians, military pensions, housing, and fuel specifically — in its spending proposals.

Russian media reported the committee’s complaints were spelled out in writing. The legislature will discuss the government budget on October 23. 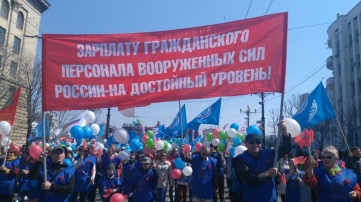 As numerous as uniformed officers and soldiers, civilian defense employees are critical to Russia’s military but their pay only averages around 30,000 rubles ($470) per month against 46,000 rubles ($718) elsewhere in the economy, Gazeta.ru reported.

They received a three percent increase on October 1 but, coming so late in the year, it offset only a quarter of this year’s inflation (4%).

The Defense Committee claimed the current average military pension in 2020 will be 23,500 rubles ($368), and has declined 20 percent in recent years because it hasn’t always been adjusted for inflation, wrote Rossiyskaya gazeta.

The committee reminded the government that President Putin promised retirees in 2012 they would get inflation plus two percent to preserve their buying power. It asked for a 6.3 percent pension increase next year.

The MOD’s mortgage savings system for servicemen was lacking 92 billion rubles ($1.4 billion) at the start of this year, the committee said. The mortgage system depends on government contributions and won’t function without this financing.

The military budget also did not contain enough money for other servicemen and their families who depend on MOD rent subsidies.

According to Gazeta.ru, the committee proposed adding 145 billion rubles ($2.3 billion) to close the gaps in the provision of military housing in 2020. But the RF government did not include this funding in the budget bill.

The Defense Committee also reported the MOD owes 7 billion rubles ($110 million) for fuel this year, and the draft three-year budget contains money for only 1.57 million tons against the 2.1 million tons the military will need. Shamanov and company say the MOD will need an extra 20 billion rubles ($314 million) for this, according to Interfaks-AVN.

It’s easy to find resources for these needs. Even if we don’t cut their pay, but just the bonuses of the top managers of state corporations, we’d find money for military pensions, and for medicine, and for housing subsidies. According to official data, they amounted to 67 billion rubles [$1 billion] for just the one year 2018.

Why Mr. Shamanov and his committee took on these particular issues isn’t clear. They didn’t tackle pay increases for active duty servicemen who are still several years behind the rate of inflation. They didn’t challenge spending on weapons systems, but then large parts of the defense budget are still secret.

They challenged the government (an easy target) rather than President Putin (a dangerous one). Shamanov and the majority of his committee are members of the party of Putin — United Russia.

Kind of a curious moment for the Russian legislature to offer some checks and balances to Russia’s executive branch.

The MOD officially describes the activity as a “strategic command-staff exercise in the command and control of the Armed Forces.”

RVSN, LRA, VTA, and Northern and Pacific Fleet forces will be involved. Ballistic and cruise missile launches will terminate on the Pemboy, Kura, and Chizha ranges.

Pemboy near Vorkuta is typically for ALCMs; Kura and Chizha are for ballistic missiles. VTA tankers will refuel Russian bombers.

The press-release said 12,000 personnel will participate in the exercise along with 213 ICBM launchers, 105 aircraft including five bombers, and as many as 15 surface ships and five submarines.

Mil and Kamov Under One Roof 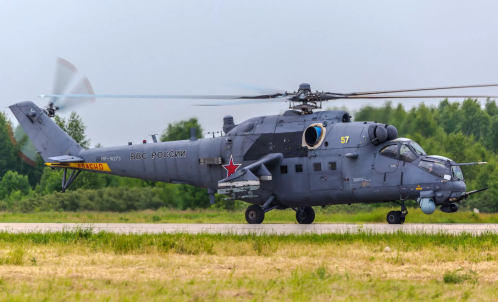 State-owned helicopter conglomerate Russian Helicopters plans to bring the Mil and Kamov design bureaus under a single organizational structure before 2022, according to a company statement.

Russian Helicopters (itself controlled by government holding company Rostekh) announced the two longstanding bureaus will be united in a new National Helicopter Center named for M. L. Mil and N. I. Kamov [National Center of Helicopter-building or NTsV — НЦВ].

Mil and Kamov will be joined in one business by mid-2020. “Further integration processes connected with optimizing the activity of the two design bureaus in the format of one company will continue until 2022,” Russian Helicopters noted. The company said the center will unite the potential of the two helicopter-building schools for more effective resolution of design and modernization missions.

The independent Mil and Kamov “brands” will be retained, but their workers will be combined in the NTsV. The merger is supposed to remove existing administrative, legal, and economic barriers to cooperation between their designers. 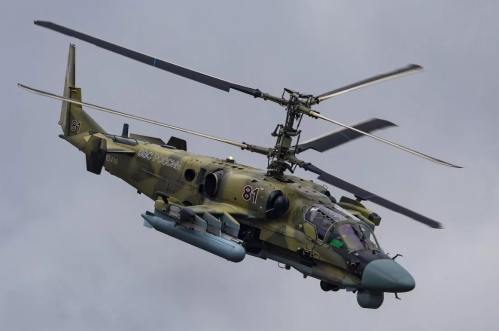 Interfaks-AVN reported the establishment of the center is explained by a need to optimize the work of a whole range of supporting and administrative sub-units and to allow engineers from both bureaus to exchange technical solutions, unify standards, and share work loads.

Besides cutting management and labor costs, the union of Mil and Kamov is supposed to reduce the time required to put helicopters into serial production.

By our accounting, the distribution of tasks between two design bureaus, as well as between the production and repair plants of the holding will allow us to free up 15-20% of their annual effort which can be directed at creating technical reserves and developing new equipment.

Korotkevich added that Russian Helicopters wants to eliminate “unnecessary competition” between Mil and Kamov on similar helicopter designs. He expects more efficient use of infrastructure and lower expenditures on testing to come from the merger of the bureaus.

This merger of Russian helicopter giants will be interesting.

There are mergers and then there are mergers. Putting Mil and Kamov under the same tent as separate entities is one thing. Сhanging their business and breaking their “rice bowls” is something else. Actually achieving efficiencies and savings is another thing too.

From Soviet times, the Russian approach was to create competition where it wasn’t in the socialist centrally-planned economy. That’s how the MOD and defense industry created world-class armaments — Sukhoy vs. Mikoyan, Ilyushin vs. Antonov, Rubin vs. Malakhit, Yuzhnoye vs. Makeyev vs. MITT, etc.

Over time the design bureaus — probably guided by the MOD and government — tended to concentrate on their specialties rather than competing directly.

This hasn’t stopped brutal clashes particularly when state purchases of weapons systems are limited or declining. It may be happening now, and it may have led the Kremlin to rationalize Russia’s military helicopter market. But blending Mil and Kamov won’t be easy. There has been more recent bare knuckle competition between the helicopter designers than in other segments of Russian defense industry.

In recent days, Primorye media reported on a demonstration by workers at Kamov’s AAK Progress plant 100 km northeast of Vladivostok. They are protesting the lack of orders for their helicopters and attendant cuts in the work force.