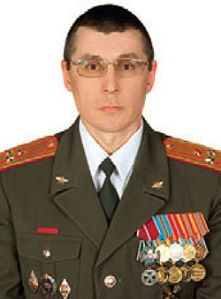 While President Medvedev may despair of the continuing corruption plague in Russian government and society, the Defense Ministry went after a fairly high-ranking figure this week.

There’s been nothing general on the military corruption situation since earlier this year, so the Kolupov case is just an interesting, isolated one.

A decorated combat veteran of Chechnya and Dagestan, Colonel Kolupov is the General Staff’s Deputy Chief of Communications, and he was in line to succeed his retiring boss until a check uncovered his failure to return a Defense Ministry apartment in Voronezh when he received another one in Moscow.

In 1996, he had a 54-square-meter apartment in Voronezh with his wife and daughter.  In 2002, Kolupov became a senior officer of the MVO’s communications directorate.  Two years later he had a second daughter and received a three-room, 81.7-square-meter Moscow apartment, which he privatized in 2008, according to Kommersant.

Meanwhile, Kolupov let his mother-in-law to privatize the service apartment in Voronezh rather than returning it to the Defense Ministry.  The loss to the state was put at 6.3 million rubles.  The colonel has been charged with large-scale fraud.  He apparently hasn’t acknowledged wrongdoing, and refused to speak with Kommersant.

Kolupov’s housing machinations are less egregious than ones occurring in the Railroad Troops Command in recent years.  But there seems to be a campaign against apartment manipulations by senior military officers.  Generally, it might be possible to conclude that the Defense Ministry’s anticorruption efforts are relatively more vigorous and effective than those of other ministries, but it would also be impossible to prove this with any certainty.  And the key word is relatively.  The scale of Defense Ministry efforts may not be significant in an absolute sense against the scope of its overall corruption problem.  One can easily think of other apartment- and housing-related corruption, involving military men and civilians, that isn’t scrutinized similarly.

This entry was posted in Crime and Corruption, Military Housing, Military Leadership. Bookmark the permalink.